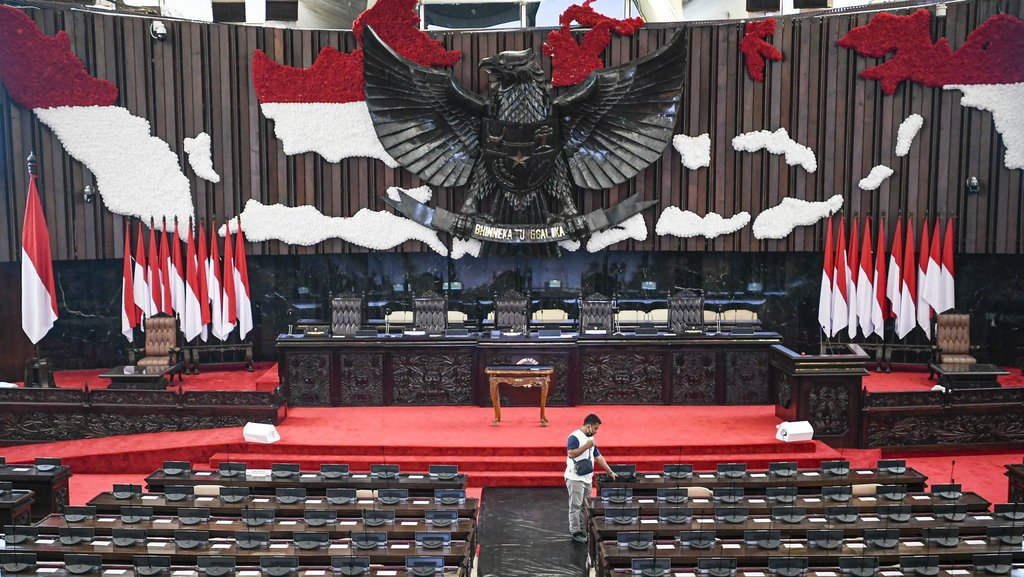 Over the past few months, senior lawmakers have been pushing to amend the 1945 Indonesian Constitution again. These irresponsible and unnecessary proposals could result in the first changes to the constitution since the four amendments, from 1999 to 2002, that delivered democratic transition after the fall of Soeharto.

Attempts to revise the constitution are not new. In 2016, the People’s Consultative Assembly (MPR) – comprising the House of Representatives (DPR) and the Regional Representative Council (DPD) – held a series of public forums discussing plans to reinstate the State Policy Guidelines (Garis-Garis Besar Haluan Negara, GBHN).

Reintroducing the GBHN – deleted with the second constitutional amendment after the fall of Soeharto, in 2000 – would place far greater power in the hands of the MPR and conflict with the presidential system introduced in Indonesia through the democratic reforms of the reformasi era.

Under the New Order, the GBHN was a document of broad principles prepared by the MPR to be implemented by the president. The president was formally bound to implementing the GBHN and could be dismissed for failing to do so. But Soeharto had such strong influence over the MPR that he was able to largely set the GBHN himself, and even if he failed to implement the GBHN he would not have faced any consequences. Post-Soeharto presidents have not enjoyed the same sweeping power as Soeharto, so reviving the GBHN might allow the MPR to exert significant control over them.

Efforts to reintroduce the GBHN in late 2016 soon fizzled out as legislators began preparing for the 2019 elections. But after President Joko “Jokowi” Widodo won the 2019 election, discussions on constitutional amendment soon resurfaced. They subsided again early in the Covid-19 pandemic, but have re-emerged in recent months.

And now, advocates for amendment have broadened their sights to include not just the GBHN (in a new guise – the Pokok-Pokok Haluan Negara, or PPHN), but also an extension to the president’s term of office, from two to three periods. Other dissenting voices have suggested the presidential term should instead be limited, to a single period, but extended to six or seven years, to reduce the amount of time spent on campaigning for re-election.

On several occasions, Jokowi has publicly expressed disapproval of proposals to extend the presidential term. But tellingly he also said it was the authority of the MPR to amend the constitution, and if it decided to proceed, he would not be able to intervene. As discussions on amendment heated up in early September, Jokowi gathered senior political party officials at the Presidential Palace, a meeting many observers presumed was focused on discussing the proposed amendments.

Formally, according to Article 37 of the Constitution, to initiate discussions on amendment, the proposal must be submitted by at least one-third of the members of the MPR. The MPR consists of 575 members of the DPR and 136 members of the DPD. If all the parties supporting the government in the legislature backed amendment, they could easily reach this one-third threshold. But the legitimacy of proposals for amendment should not be based simply on whether they have the support of enough seats in the MPR – proposals for amendment should also be judged on whether they represent the interests of the citizens legislators are supposed to represent.

The push for constitutional amendment has been driven purely by political elites – there have been no public demands for constitutional change. Reviving the GBHN was proposed by the MPR and coalition parties, while plans for extension to the presidential term came from Jokowi’s circle of power, particularly the volunteer groups involved in his 2019 campaign. They have tried to claim that the pandemic is an emergency that would prevent the presidential election being held in 2024. This argument is particularly far-fetched, and not only because many believe the worst of the pandemic will likely have passed before then. Less than a year ago, during the peak of the outbreak in December 2020, the government insisted on holding elections for local leaders in 270 regions.

There is clearly no “constitutional moment” to justify constitutional change. Bruce Ackerman’s influential theory of constitutional change argues that there are four stages in a constitutional moment. First, there must be broad and strong popular support for change. Second, amendment proposals must be solid, concrete, and include as many suggestions from the people as possible. Third, there must be opportunities for other branches of government to offer different, contrasting, opinions on amendment. Fourth, because of the broad popular support for change, the agreed amendments must be translated into principles in the constitution, and all branches of government must comply with them.

The proposals for constitutional amendment have not even met the first of these stages.

The MPR claims to have held a series of public discussions, seminars, and academic forums discussing the proposed changes. But this hardly qualifies as broad and strong support from the people. In any case, not all academics agree with the proposed amendments anyway.

Studies by the MPR’s research arm (Badan Pengkajian MPR) should not just be “socialised” through academic forums, but should be transparent and easily accessible by the public. This would allow a much wider ranger of stakeholders to debate the proposed amendments – not just policymakers and academics.

The current context is vastly different to the last time the constitution was amended in the years following the fall of Soeharto. At that time, calls for constitutional amendment emerged because of a major political transition driven by people power. There were undeniable demands to change the centralised authoritarian system to an open democratic system, and this required the involvement of multiple stakeholders. Indeed, reformist civil society groups had a major influence over changes in the political and institutional landscape that were included in the revised constitution.

Yes, advocates for amendment may be able to secure approval from other branches of government in line with the fourth stage, given that in Jokowi’s second term, the legislature and judicial institutions seem increasingly under the influence of the executive. But, in theory, this stage still requires broad and strong public support — which remains lacking.

Fear of return to the dark era

Experts believe that reviving the GBHN and extending the president’s term would seriously endanger Indonesian democracy.

Under the existing system, the president and legislature are on equal footing. But before the amendments to the constitution, the MPR was the highest governing body, above the president and other state institutions. Reinstating the GBHN would mean that the president would again be responsible to the MPR, not to the people who voted for him or her.

Moreover, Indonesian law already provides for a comprehensive set of development planning documents. Any apparent failures in development have not been caused by the absence of guidelines.

Part of the problem is that for many years, the development planning process, coordinated under the National Agency for Development Planning (Bappenas), has often been out of sync with the legislative planning process, coordinated by the Ministry of Law and Human Rights. Unfortunately, government administration in Indonesia is highly dependent on the existence of regulatory products. Often elements of the development plan never get a legal basis, because they have not been included in legislative plans. The government and legislature would be better off sorting out coordination and implementation problems like this, rather than introducing yet another framework for development planning.

Meanwhile, extending the president’s term of office would be out of step with the principle of limitations on executive power in democratic countries. Countries adopting a presidential system commonly apply a limit of two-terms. There are valid fears that allowing a third term could leave the door open for even more additional terms, as occurred under the New Order.

Legislators’ failures during the pandemic

Constitutional amendment is a massive process and requires a lot of resources. The debate on the amendment has already absorbed the attention of policymakers, who should be focused on dealing with the dire economic and public health consequences of the Covid-19 pandemic. The constitutional amendment process will likely result in still further diversion of budget resources from managing the Covid-19 crisis, where they are urgently needed.

Over the past two years, the DPR (the main component of the MPR) has repeatedly failed the people it supposedly represents. In September 2019, against the wishes of the public, it passed a revised law on the Corruption Eradication Commission (KPK), seriously weakening the agency. Anger over the revisions was one of the factors that precipitated the massive #ReformasiDikorupsi (#ReformCorrupted) protests, the largest student and civil society protests since the end of the New Order.

Seemingly unfazed, in October last year, the DPR again ignored strong criticism from labour unions, academics, and human rights activists to pass the regressive Omnibus Law on Job Creation. Legislators are now at it again, going ahead with plans to build a new capital city, after discussions were delayed in 2020, despite little popular support for the idea.

The capital city bill is listed on the list of priority bills for discussion in 2021. Other bills on the list – such as the disaster management bill, outbreak control bill, personal data protection bill and the anti-sexual violence bill – are all far more urgent, especially in the context of Covid-19.

Another concern is that public participation tends to be hampered when the Covid-19 related social distancing restrictions are applied. The legislature has a poor track record of public participation during the pandemic, as seen in debates over the revision to the law on the Constitutional Court, the revised Mining Law, as well as the Job Creation Law. There is no guarantee that legislators will suddenly change their tune and allow a more open and participatory process for the constitutional amendment.

Constitutional amendment should not be seen as taboo. But political elites’ attempts to revive the GBHN, returning the MPR – which they control – to being the highest political authority in the country, and extending the president’s term of office must be stopped immediately.

This is not only because of the complete absence of public support or urgency in the midst of a pandemic, but also because the proposals could seriously damage Indonesia’s young and increasingly fragile democratic system.