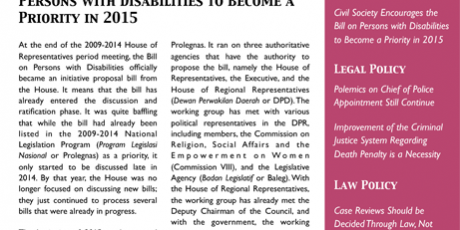 Case Reviews Should be Decided Through Law, Not Government Regulation

In the first week of January, high-ranking officials from the legal sector met to discuss the Constitutional Court Decision No. 34/PUU-XI/2013 that annulled Article 268, paragraph (3) of the Criminal Procedure Law (KUHAP) regarding the limitation on case reviews (peninjauan kembali or PK) of criminal cases. The meeting was held at the office of the Minister for Law and Human Rights, Yasonna Laoly, and was attended by the Coordinating Minister for Political, Law, and Security, Tejo Edhy; Attorney-General HM Prasetyo; and Criminal and Investigation Chief of the National Police, Suhardi Alius. Justice Artidjo Alkostar of the Supreme Court and a representative of the Constitutional Court also attended the meeting.

The discussion was a furtherance of the government and Supreme Court’s reaction to Constitutional Court Decision No. 34/PUU-XI/2013. During the previous week the government, through the Attorney-General, on many occasions stated that he encountered obstacles in carrying out executions for narcotics convicts because PKs could be lodged multiple times by the convicts. In response to the government’s position, the Supreme Court then issued a circular letter (Surat Edaran Mahkamah Agung or SEMA) stating that case reviews may only be filed once, referring to the Law on Judicial Power (UU Kekuasaan Kehakiman) and the Law on the Supreme Court (UU Mahkamah Agung) as a basis for his decision. Many legal experts considered the government’s position as inconsistent as it is not in accordance with the KUHAP. Under the KUHAP, an extraordinary legal remedy (including a PK) cannot suspend execution. Legal commentators also argued that the SEMA contradicts the Constitutional Court decision since KUHAP is the applicable law specifically used (lex specialis) in criminal cases.

Nevertheless, last week’s meeting resulted in an agreement requiring the government to follow up on the Constitutional Court’s decision by forming a government regulation (peraturan pemerintah). A government regulation is intended to be a legal basis concerning the procedures for submission of a case review application, the clear definition of novum (new evidence related to the case), and the limitation for filing the case review.

Forming a government regulation to curb the court’s authority with regards to case reviews is open to questioning for several reasons. First, under Article 10 of Law No. 12/2011 on the Establishment of Laws and Regulations, a legal arrangement as a result of a Constitutional Court decision should be regulated by law  (undang-undang). Second, the judiciary is a branch of power that is separate and independent from the executive branch (the government), thus the legal arrangement of its functions and authorities should be regulated by law , and not by government regulations.

Therefore, the appropriate step that should be taken by the government (president) and the House of Representatives (Dewan Perwakilan Rakyat or DPR) is to amend the KUHAP, especially the legal arrangement related to case reviews that could be submitted more than once. (RA)

While the debate is still ongoing about the appropriateness  of the death penalty, executions were carried out against six narcotics convicts whose clemency petitions were rejected by President Joko Widodo. The execution of the six convicts from Indonesia, Malawi, Nigeria, Vietnam, Brazil, and the Netherlands were done at Nusa Kambangan and Boyolali on Sunday, 18 January 2015. Post-execution, Brazil and the Netherlands reacted by recalling their ambassadors for consultation, with Brazilian President, Dilma Rousseff, stating that the execution will affect the relationship between Indonesia and Brazil. Meanwhile, the Foreign Minister of the Netherlands, Bert Koenders, condemned the act and stated that the death penalty is cruel, inhumane and that it ignores the honor and integrity of a human being.

Indonesia should be aware that there are 267 Indonesian citizens sentenced to the death penalty in other countries. Indonesia has the right to seek the release of its citizens, as well as for other countries to try the same in Indonesia. However, in the field of international relations, where the principle of reciprocity is widely recognized, executions that have been carried out by the Indonesian government would likely weaken its bargaining position in relation to freeing the hundreds of Indonesian citizens facing the death penalty abroad. Such consequences should be considered by the Indonesian government before they execute foreigners.

The death penalty, according to the provisions of Law No. 35/2009 on Narcotics, refers to the provisions of Article 24 of the United Nations Convention Against Illicit Traffic in Narcotic Drugs and Psychotropic Substances 1988, which states “A party may adopt more strict or severe measures than those provided by this Convention if, in its opinion, such measures are desirable or necessary for the prevention or suppression of illicit traffic.” Under those provisions Indonesia, as a party to the existing regulations, may indeed enforce the death penalty for drug crimes. The government has stated that the execution of six death row inmates was performed solely for law enforcement. Despite its purpose, the public should question the propriety of the imposition of the death penalty when viewing the Indonesian criminal justice system that runs today. (ED)

President Joko Widodo chose to postpone, as opposed to cancel, the appointment of Budi Gunawan as the Indonesian Chief of Police. A suspect in a corruption case should stand as a cautionary tale for the future of anti-corruption movements.  To remove Budi Gunawan as a Chief of Police candidate would not be a difficult move. According to Article 1 No. 6 of Law No. 28/1999 on the Implementation of a Clean Government Free from Corruption, Collusion, and Nepotism, one principle that should be held in high esteem is that of propriety. Such a principle is mandatory for government officials while exercising their authority, according to Article 8, paragraph (2)b on the Law on Government Administration (No. 30/2014).

In the meantime, the President has selected Badrodin Haiti, the Deputy Chief of Police, as acting Chief of Police. According to Cabinet Secretary Andi Widjajanto, the President did not utilize Law No. 2/2002 on the Indonesian Police on this particular matter, but used his discretional power instead. According to Article 1 No. 9 of the Law on Government Administration, discretion is an executive set of actions set by officials to address unclear matters within the government. ‘Unclear’ terms are defined as follows: (i) the matters are not yet set, (ii) incomplete, (iii) unclear, or (iv) the government is perceived to be stagnant.

In fact, Law No. 2/2002 on the National Police has set a clear and complete standard on how the appointment of Chief of Police is to be undertaken. Government stagnancy as the basis for utilising discretionary acts by the President actually has no justification since it was the President himself that dismissed Sutarman, the then Chief of Police. This makes the President’s decision to appoint Deputy Chief of Police, Badrodin Haiti, a questionable one. The President should instead propose a new name for the Chief of Police and remove Budi Gunawan as the nominee for Chief of Police. The replacement process should be administered with full respect of the law to prevent future mishaps. (MSG)

At the end of the 2009-2014 House of Representatives period meeting , the Bill on Persons with Disabilities officially became an initiative proposal bill  from the House. It means that the bill has already entered the discussion and ratification phase. It was quite baffling that while the bill had already been listed in the 2009-2014 National Legislation Program (Program Legislasi Nasional or Prolegnas) as a priority, it only started to be discussed late in 2014. By that year, the House was no longer focused on discussing new bills; they just continued to process several bills that were already in progress.

The beginning of 2015 marks a good starting point for initiating work on the early stages of the lawmaking process, including the planning, preparation, discussion, and enactment of bills, of which the Bill on Persons with Disabilities should be included.

To implement the bill, PSHK , as part of the National Coalition for the Bill on Persons with Disabilities’ Working Group, lobbied relevant parties to push for the inclusion of the bill in the 2015 Prolegnas. It ran  on three authoritative agencies that have the authority to propose the bill, namely the House of Representatives, the Executive, and the House of Regional Representatives (Dewan Perwakilan Daerah or DPD). The working group has met with various political representatives in the DPR, including members, the Commission on Religion, Social Affairs and the Empowerment on Women (Commission VIII), and the Legislative Agency (Badan Legislatif or Baleg). With the House of Regional Representatives, the working group has already met the Deputy Chairman of the Council, and with the government, the working group has met with Khofifah Indar Parawansa, the Minister of Social Affairs.

With a shared vision and commitment between civil society groups—particularly persons with disabilities—and legislators, it is expected that the legislative branch will proceed with the bill. As previously mentioned, it is expected that discussions on the bill will begin in early 2015 and should therefore hopefully be passed by early 2016. (FN)