Indonesia Must Investigate Claims Of Corruption In Execution Cases

You are here:
Tak Berkategori 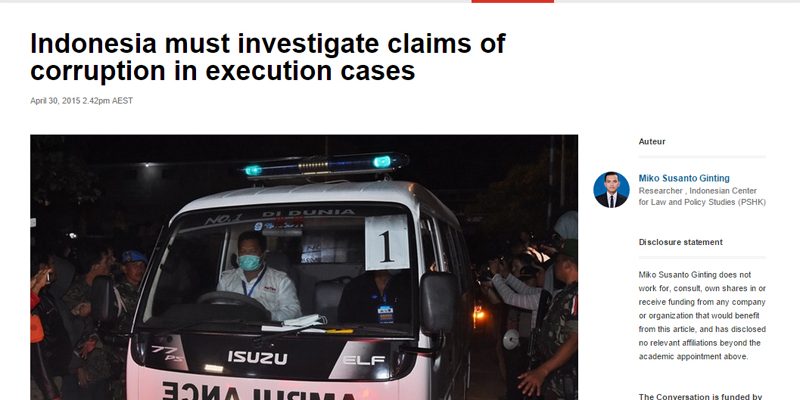 The executions in Indonesia were a mistake. Eight people are dead, including Andrew Chan and Myuran Sukumaran, despite alleged violations in the judicial process.

The Indonesian government should properly investigate allegations of corruption in the judicial process that condemned them to death. The government should learn from its mistake and stop executing people on death row.

Days before Chan and Sukumaran were executed, their former lawyer Muhamad Rivan claimed that the sentencing judge requested around $130,000 to reduce the death sentence to 20 years in prison. This should have prompted the government to delay their executions, as was done in the case of Filipina Mary Jane Veloso. She was spared at the 11th hour after the person alleged to have tricked her into carrying drugs surrendered to police in the Philippines.

Problems in the judicial process

Doubts about a fair trial abound in most of the cases of those who were executed early on Wednesday. Chan and Sukumaran were not the only ones whose trial processes are controversial.

Brazilian Rodrigo Gularte suffers from schizophrenia. Under Article 44 of the Indonesian Criminal Code, people with mental illness should not be criminalised.

Zainal Abidin, the only Indonesian in the group, did not have a lawyer during the investigation process. He said police tortured him to confess to the possession of marijuana. Two people suspected of being the masterminds of the marijuana trade in his case were given prison time. They are now free.

Nigerian Martin Anderson was initially thought to be Ghanaian. This resulted in a denial of legal and consular aid by the embassy. Police violence was also alleged as he was shot in the leg during arrest, a common occurrence in Indonesia.

Silvester Obiekwe Nwolise, also Nigerian, did not have a translator during trial. Like Chan and Sukumaran, bribes were allegedly demanded to reduce his sentence.

These example show there are strong doubts that their death sentences came out of fair trial processes. Nevertheless, the government ignored these doubts and went on with the executions, citing the need for “law enforcement” and to uphold the rule of law.

The death sentence is an irreversible form of punishment. We cannot resurrect the dead. If in the future, we found out mistakes were made, we could not reverse the punishment, nor compensate for it.

In civilised countries, the minimum standard in sentencing has to fulfil the standard of “beyond reasonable doubt”. This is a universal principle.

It is based on the fact that criminal punishment takes away a person’s rights. The state should not take away rights arbitrarily. It should do so with a sound reason and an objective examination mechanism.

Satisfying the principle of beyond reasonable doubt involves three tests. First, is the person accused in a fit state to be deemed responsible for their criminal actions? Second, are the facts and evidence conclusive proof of the person’s guilt? Third, is the trial process fair?

In various crime cases, the likelihood of satisfying the standard of beyond all possible doubt or absolute certainty is very slim. We can even say it is close to impossible. At the end of the day, sentencing would always depend on subjective judgements of law enforcement officers, judges, or presidents.

In the context of Indonesia’s judicial system, even before we talk about fulfilling the first two tests — the person and the evidence — to pass the standard of beyond reasonable doubt, problems abound in ensuring fair trials. We could not deny that there are plenty of cases where the suspect or convict does not have lawyers, or the suspect is detained without clear reasons, that judges ask for and receive bribes, and that police torture to extract confessions.

The law should be a remedy, especially for the wounds it creates itself. Investigations of the deviations in the judicial process should be carried out even though the execution has been done.

Indonesia’s attorney-general has said that executions were necessary to uphold the rule of law. This is a great moment for the attorney-general’s office to do so. They have to investigate problems in the judicial processes that led to the executions of Chan, Sukumaran and six other people.

If the investigation proves that the integrity of the judicial process was violated, the state should apologise for executing an irreversible punishment while ignoring the facts that could have influenced sentencing.

Families of the death-row convicts could also sue the government if it does not thoroughly investigate allegations of corrupt practices in the judicial process.

What is at stake if the government does nothing? The Indonesian legal system will lose its credibility in the eyes of the public. Worse, with more than 130 people on death row, more people will die under this flawed system.