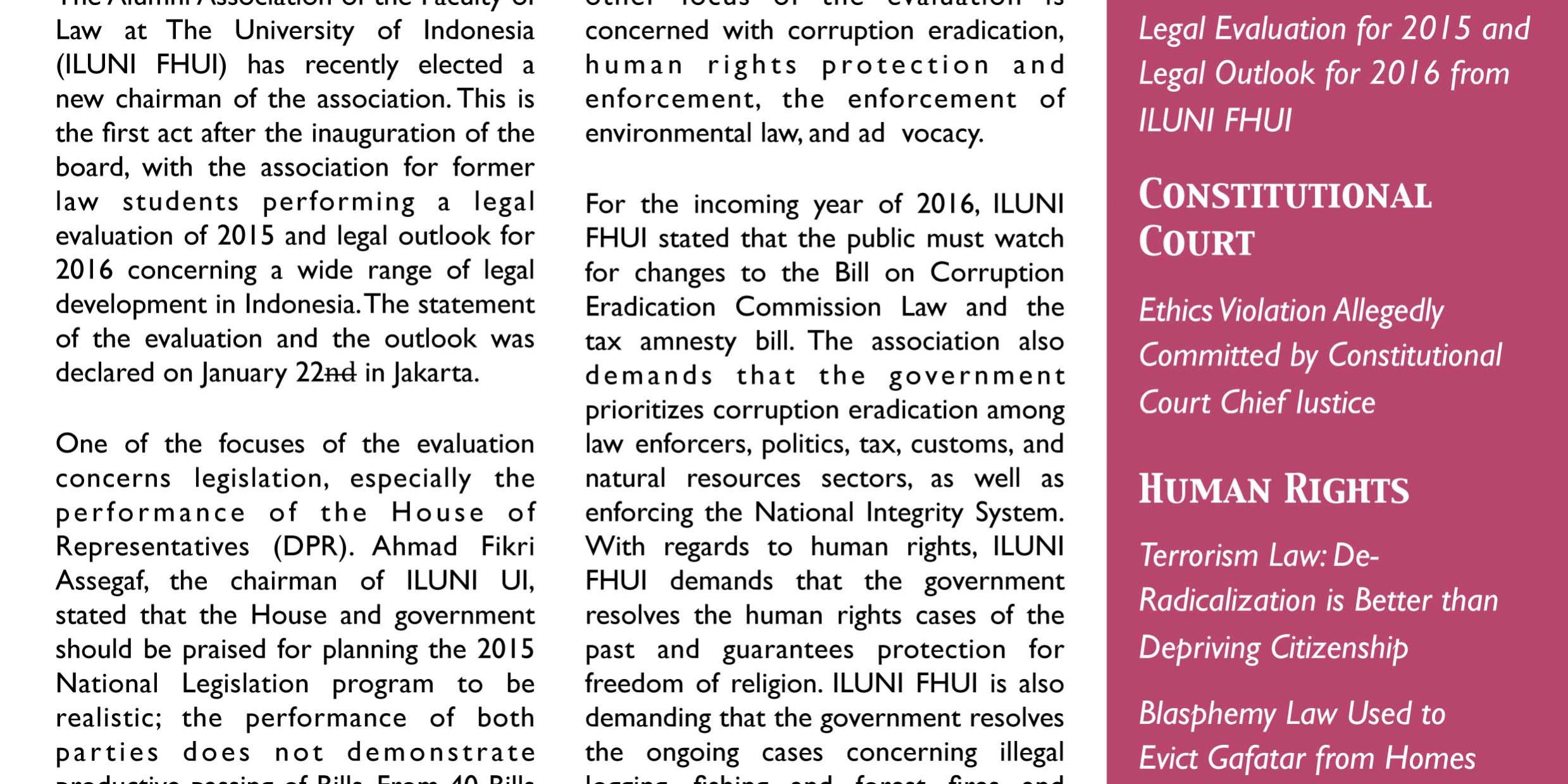 The Alumni Association of the Faculty of Law at The University of Indonesia (ILUNI FHUI) has recently elected a new chairman of the association. This is the first act after the inauguration of the board, with the association for former law students performing a legal evaluation of 2015 and legal outlook for 2016 concerning a wide range of legal development in Indonesia. The statement of the evaluation and the outlook was declared on January 22nd in Jakarta.

One of the focuses of the evaluation concerns legislation, especially the performance of the House of Representatives (DPR). Ahmad Fikri Assegaf, the chairman of ILUNI UI, stated that the House and government should be praised for planning the 2015 National Legislation program to be realistic; the performance of both parties does not demonstrate productive passing of Bills. From 40 Bills that were planned by the 2015 National Legislation Program, only three have been authorized for enactment. Including the open cumulative Bills, the House only authorized 11 laws in 2015. The House is relatively slow in the current period as an effect of political tension between the Merah Putih Coalition and the Indonesia Hebat Coalition. The other focus of the evaluation is concerned with corruption eradication, human rights protection and enforcement, the enforcement of environmental law, and advocacy.

For the incoming year of 2016, ILUNI FHUI stated that the public must watch for changes to the Bill on Corruption Eradication Commission Law and the tax amnesty bill. The association also demands that the government prioritizes corruption eradication among law enforcers, politics, tax, customs, and natural resources sectors, as well as enforcing the National Integrity System. With regards to human rights, ILUNI FHUI demands that the government resolves the human rights cases of the past and guarantees protection for freedom of religion. ILUNI FHUI is also demanding that the government resolves the ongoing cases concerning illegal logging, fishing and forest fires and enforces the land reform program. Lastly, ILUNI FHUI stated that ideally, advocacy will be best served by a single organization. However, when this is not achievable, a single standard for recruitment and education with a single relevant ethics code for all advocacy organisations and consistent supervision. (KFL)

After the Thamrin Bombing of 14 January 2016 that was allegedly carried out by the Islamic State of Iraq and Syria (ISIS), the government is proposing to revise Law No. 15/2003 on Anti-Terrorism. The government is stressing the need to revoke the citizenship of those involved in any terrorist activism, including ISIS. This proposal resembles a double-edged sword. On the one hand, this is a natural reaction to the terror that took place not far from Presidential Palace and against a greater potential threat to the security of the republic. On the other hand, this proposal has potential to violate human rights.

Even if this discourse is realized, a legal clash will occur. Revocation cannot be performed simply by ignoring the principle of presumption of innocence. Instead, it should respect the principle of equality before the law. Even if the acts of terrorism are committed by a proven person, the sanctions will not resolve the problem of terrorism. There are no rules and due process mechanisms for removal of citizenship in this country, and no assessment of legal consequences for the person concerned. Even if this person loses their citizenship, they can ask for asylum in another country and gain citizenship status there. They can additionally control terrorism activities from afar, negating the effectiveness of revoking citizenship. This government proposal should thus be rejected. Prevention efforts must take precedence over such policies. The government should increase alertness and improve the performance of intelligence agencies as well as continuously making efforts to de-radicalize former terrorists through proper social development and programs of social assimilation. The de-radicalization effort has been proved to be more successful than proposing revocation of citizenship. (MFA)

4,500 former members of the Fajar Nusantara Movement (Gafatar) have been evicted from their community in West Kalimantan to be deported to their original hometowns for “de-radicalisation”. The group was attacked by a local mob on January 19. The National Police stated in explanation that Gafatar was perceived as a “deviant” organisation and was linked to terrorism and radicalism.

In August 2015, Religious Affairs Minister Saifuddin declared Gafatar to be illegal, banning membership and participation. While members of Gafatar have not been declared terrorism suspects and insist it is not a religious organisation, the National Counterterrorism Agency (BNPT) argued that Gafatar terrorises Islam in Indonesia by not conforming to the mainstream Islamic teachings promoted by the government. The same argument was used to disband a Shi’a group in 2012 and an Ahmadiyyah group in 2006. On both occasions, the leaders of the groups were imprisoned under the Blasphemy Law; Law Number 1/PNPS/1965 on the Prevention of “Religious Abuse and/or Defamation” (Undang-Undang Penodaan Agama), and a similar fate is predicted for Gafatar leaders. Citizens can be imprisoned for up to five years for deviation (penyimpangan) from the six officially recognised religions. The law does not prohibit practice of a religion not recognised by the Constitution. The validity of this law was upheld by review in the Constitutional Court in 2010 due to Article 28J(2) of the 1945 Constitution, which states that limitations can be imposed on human rights to protect religious values and public order. The violent attack on the group is invoked as necessitating delegalizing of the group. The government has stated that Gafatar follow Ahmad Musadeq as a spiritual leader, who declared himself a prophet and was subsequently imprisoned; Muslim practice prohibits recognition of a prophet following Muhammad.

The Blasphemy Law contradicts Indonesia’s obligations under international law and has prompted unflinching opposition from international organisations. Indonesia is a party to the International Covenant on Civil and Political Rights (ICCPR) and is obligated to ensure that people have a protected freedom of expression. Religious values are not considered a legitimate reason to limit freedom of religious practice. However, as national law and international law hold the same hierarchical position in Indonesia’s legal system, the contradiction does not render the Blasphemy Law invalid. The law may only be overturned if it contradicts the Constitution, and the Constitutional Court did not find this on review. Gafatar may only be exempt from prosecution and disbanding under the Blasphemy Law if the members demonstrate that it is either a separate religious group, rather than an Islamic “deviation”, or that it is a social and non-religious community, as Gafatar currently asserts. (HD)

Designation of Forest Area Change in Government Regulation No. 104 Year 2015

Unfortunately, the implementation of the exchange and release of forest area mechanisms is far from the precautionary principle and is actually laden with violations. Non-compliance with the requirements to provide replacement land by the applicant and misuse of applicant authority occur commonly. For example, misuse of authority is demonstrated in the bribery case involving Bogor Regent, Rachmat Yasin, in the recommendation process of exchanging 2754.85 hectares of forest area. Additionally, the involvement of Governor of Riau, Annas Maamun in the bribery case relating to obtaining a permit for the release of forest land for palm oil plantations also raises the issue of misused authority.

Article 33 of the Constitution requires that earth, water and natural resources contained therein shall be controlled by the State and used for the greatest prosperity of the people. Therefore, the implementation of forestry regulations should uphold the soul and the spirit of democracy, equitability and sustainability. Implementation of policy exchange and release of forest area should be closely monitored and evaluated. The government must ensure that the accelerated development does not cause harm to the forest as the centre of natural life. (ED)

The Constitutional Court (Mahkamah Kosntitusi/MK) has been shocked again with indications of ethics violations by MK judges. Arief Hidayat (MK Chief Justice) allegedly wrote a memo to Widyo Pramono (Junior Attorney General for Supervision) containing Arief’s recommendation for Widyo’s scientific work to be a requirement for becoming a Professor at the University of Diponegoro. The major problem is Arief’s request for special treatment of his family member; M. Zainur Rochman (Chief of Civil Code Section at the District Attorney, Trenggalek). There are several indications that the memo was written by Arief: it used the letterhead of MK; it contained Arief’s signature and business card; and the handwriting in the letter had similarities to earlier examples of handwriting by Arief. When prompted for clarification, Arief and Widyo, both acknowledged the recommendation for scientific works, but denied there was an attempt to give special treatment to Zainur.

From an ethical perspective, it is clear that the request for special treatment violates the principles of appropriateness and politeness which are stipulated in the MK Regulation Number 09/PMK/2006 on the Code of Ethics and Conduct. This regulation prohibits judges from utilizing MK prestige to gain benefits for their families. Based on the clarification offered, MK Board of Ethics should begin to respond to the rumours circulated by the media. Under the provisions of MK Regulation Number 2 2013 on Board of Ethics, the Board of Ethics can conduct examination procedures through two methods, either through reports or information. Particularly for information, news in print or electronic mass media can be used as preliminary evidence for the Ethics Board when conducting an examination of the relevant parties.

MK is often in the public spotlight when dealing with cases concerning political issues and indeed, MK is currently handling cases of the disputed 2015 local election. Examination by the Board of Ethics is essential to immediately ascertain the contents of the memo. If there was a violation of ethics, Arief must be sanctioned. Otherwise, if it is not proven, there must be vindication for Arief. Surely, the examination process must uphold the principles of presumed innocence and accountability as stipulated by the MK Code of Ethics to maintain the dignity of the court. (MRW/IHM)